CDM 2015 will replace CDM 2007 on 6 April 2015. The ACOP will also be withdrawn.* The draft regulations are available now but may be subject to change prior to 6 April 2015. These include transitional arrangements. This note is a practical guide to what you need to do now.

Until CDM 2015 comes into force, you should continue to comply with CDM 2007, however, being prepared for the changes is essential for a smooth transition into the new regime.

No.  The thresholds for a notifiable project have in fact increased from 30 days or 500 person days under CDM 2007 to 30 working days where there are more than 20 workers working simultaneously at any point or in excess of 500 person days.  However, the coupling of notifiable projects and the appointment of a Principal Contractor under CDM 2007 no longer applies, so even if your project is not notifiable under CDM 2015, you may still be required to appoint a Principal Contractor.

Have you appointed a CDMC?  If yes, then you must appoint a ‘Principal Designer’ in writing (a new role created by CDM 2015) by 6 October 2015 (unless your project comes to an end first) and if you fail to do so, you will be deemed to be fulfilling certain duties of the Principal Designer yourself.  If you are commencing a project now, or already have one on the go, you should check the terms and conditions of your CDMC appointment for flexibility to terminate the appointment, once it becomes redundant under CDM 2015. You should also consider which existing member of the design team is best placed to take on the role of Principal Designer and consider what adjustments may be required to their appointment for carrying out this role – remember it needs to be in writing. If your design team is to be novated to the contractor, consider what is required in terms of ‘retained services’ or another structure to preserve the Client appointed role of principal designer.

Under CDM 2007 for notifiable projects, Clients have a duty to appoint a CDMC as soon as reasonably practicable after initial design work or other preparation for construction work has begun. Where there is no such appointment, the Client will be deemed to be the CDMC in lieu (and therefore be responsible for the duties & competences of CDMC).  Clients should bear this in mind if they are tempted to postpone appointing a CDMC pending the coming into force of CDM 2015.  Clients should also familiarise themselves with their new duties under CDM 2015.

Help, I am a CDM Coordinator.  What should I do?

If you are already appointed in relation to a project, come 6 April 2015, the Client may need to appoint a Principal Designer (see above), at which point your role, in terms of CDM 2015, will cease.  After 6 April 2015, but before the appointment of a principle Designer you must comply with the duties set out in paragraph 5 of Schedule 4 to CDM 2015.  These include duties to cooperate and share information and keep the health and safety file up to date and in compliance with CDM 2015.

I have been asked to carry out the role of Principal Designer.  What does that entail?

Those who are considering the role of Principal Designer for existing projects or new projects commencing after 6 April 2015 must consider the number of new duties and responsibilities and what additional fees will be required to cover this.  If your appointment as designer is to be novated to a contractor, consider the implications of any retained services of principal designer to the Client. Further, will any third party involvement be required – from CDM Consultants for example – and does your existing professional indemnity insurance cover this new role? Being prepared and proactive could help you secure additional work from Clients.

Contractors and Principal Contractors; watch out for additional duties.

Every project needs a construction phase plan, whether notifiable or not, under CDM 2015.  Where there is no Principal Contractor, this duty will fall to the only Contractor.  In such a case, single Contractors must ensure that they prepare a construction phase plan that meets the requirements of CDM 2015 as soon as is practicable after 6 April 2015 – whether or not you are asked to prepare one by the Client.

Where can I find our more?

bto can advise what the new duties are under CDM 2015 and can help you identify what changes are required to your contract documents to comply with this legislation. 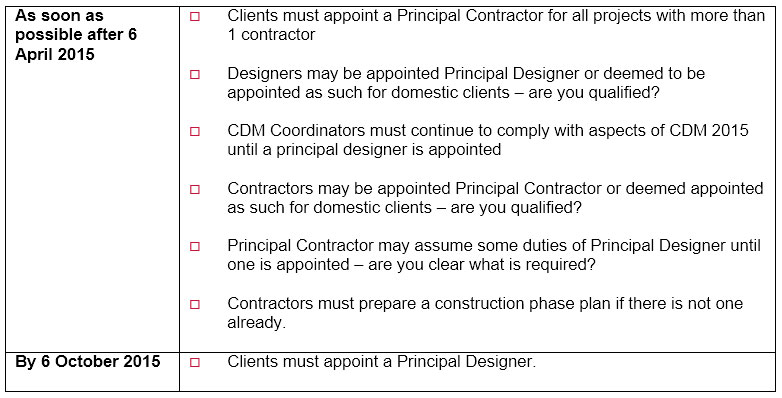 If you require further information, please do not hesitate to contact: