Leading Scottish law firm bto solicitors has announced the promotion of Garry Ferguson from Associate to Partner within the firm’s thriving Insurers’ Representation team. In addition to Garry’s promotion, Ashley Mawby will also join the firm from Dundas & Wilson, where she was a Senior Associate in the Professional Indemnity team. 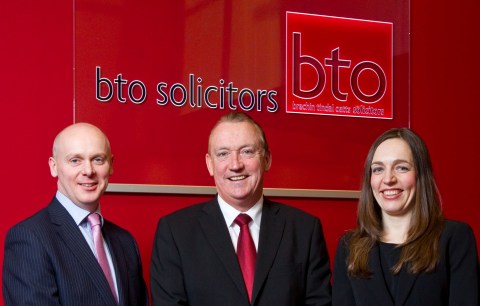 In his new role Garry will work with existing Partner Pamela Stevenson and will head up the Personal Injury team which deals with claims from £50k to £500k.

Garry has over 17 years’ experience in civil litigation, principally in the area of Defender reparation, acting for major UK insurers. In that time, he has handled a wide range of insurance related matters including personal injury, property and product liability cases.

Garry has considerable experience in both the Sheriff Court and Court of Session and typical cases handled included public and employer’s liability cases arising out of workplaces as diverse as constructions sites, factories, offices and shops, hospitals, offshore installations and farms. His road traffic accident experience ranges from minor low velocity impact to cases involving fatalities arising from accidents involving both commercial and private vehicles.  He also has acted for insurance companies representing their interests and those of their policy holders at Fatal Accident Inquiries.   Ashley Mawby will be joining bto’s dedicated band 1 Professional Negligence team, working closely with Partners Derek Allan and Alan Eadie. She will act in the defence of claims against  various professions, but will be focussing particularly on solicitors..

In the past eight years, Ashley has gained considerable experience acting in the defence of claims and court actions against solicitors, accountants, surveyors, architects and engineers on the instructions of their professional indemnity insurers. She has also acted for financial services clients in the pursuit of losses sustained as a result of negligence by professionals.

Willie Young, bto’s Chairman, said: “Garry has been a valuable member of the bto insurance team for three years. We are very pleased to be able to announce his promotion to Partner as our team of insurance professionals continues to grow to over 60. Working alongside existing Partner Pamela Stevenson, we believe his new role will provide a significant benefit to our clients in the personal injury field."

“To further bolster our team’s experience and offering, we also are very pleased to welcome Ashley Mawby to the firm. She brings with her some excellent experience particularly in defending solicitors in claims against them.”