Leading independent law firm BTO Solicitors LLP has announced that two of its associates have become civil Solicitor Advocates, bringing the total number of Solicitor Advocates in the firm’s ADVantage Advocacy Service team to 20, and representing the highest number in any firm in Scotland.

Mark Hastings and Lewis Richardson, both Associates at BTO, were admitted at a calling ceremony yesterday at the Court of Session. They now have extended rights of audience before the superior civil courts in Scotland as well as the Supreme Court. 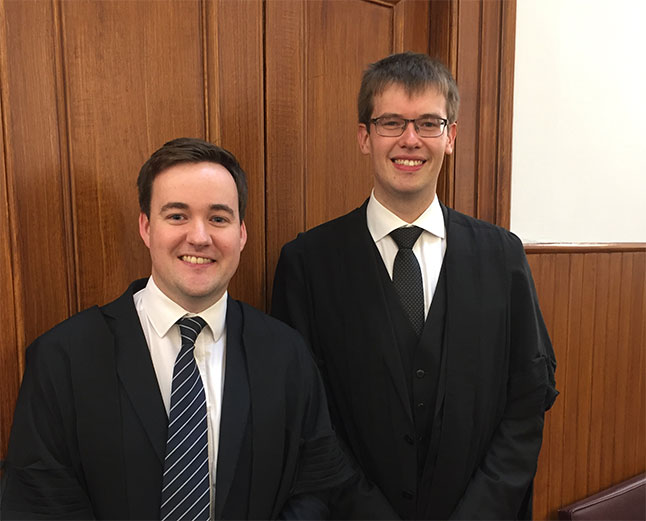 Mark is an associate in the Insurance Catastrophic Injury team, dealing with complex claims arising from a wide variety of accidents. He has also handled a number of pain disorder cases, including chronic pain, somatoform and fibromyalgia. He has extensive experience of litigating in the Court of Session. Lewis is an associate in the Insurance team where he focuses on defending disease, motor, employers’ and public liability claims. He trained solely in litigation and has appeared regularly in Edinburgh Sheriff Court for both procedural and contentious matters.

Alan Borthwick, chairman at BTO, commented: “I am thrilled that both Mark and Lewis have achieved this qualification. They are both accomplished solicitors who have made significant contributions to the firm. Their appointments as solicitor advocates not only reflect their impressive legal and advocacy skills, but also the depth, experience and ambition of our growing and hugely talented litigation team.”