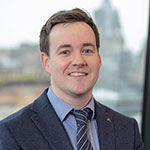 Mark is a Senior Associate and a Solicitor Advocate in our Catastrophic Injury Team. He deals with complex claims arising from a wide variety of accidents including road traffic accidents, employers’ public and occupiers’ liability claims which have caused catastrophic injuries. He has dealt with a number of cases involving fatalities where complex claims for future loss of support have arisen.

He has also dealt with several cases involving amputations which involved significant claims for future care, prosthetics and wage loss, often necessitating the use of split multipliers. Mark was the instructing solicitor in the recently reported judgment from the Outer House of the Court of Session in which the Pursuer sought an award of £1.2 million for the cost of prosthetics alone. The Defenders’ prosthetic expert’s evidence was preferred, resulting in a saving of over £1 million for the clients.

Mark has also handled a number of pain disorder cases including chronic pain, somatoform and fibromyalgia and has experience in securing the relevant evidence to identify whether the claim is genuine. The two years he spent in the past working for a leading Scottish claimant firm have given him a good insight into how claimant firms seek to investigate claims and build costs, which assists in assessing the merits of a particular claim.

He has a great deal of court experience conducting proofs on behalf of clients in the Sheriff Court and now appears in Court of Session actions.