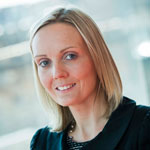 Joanne is a Senior Associate within BTO’s Insurance team. She was admitted as a solicitor in 2004 having joined BTO solicitors as a trainee in 2002 and has worked for the Firm ever since.

Joanne has specialised as a litigator for insurance companies throughout her legal career dealing with a wide range of insurance claims from motor claims to EL, PL, occupational illness, professional and clinical negligence claims.

For the last 8 years, Joanne’s practice has specialised in high values cases in which "catastrophic" injuries have been sustained. This varies from claims for the most devastating spinal injuries to serious brain injuries and multiple severe orthopaedic and crushing injuries.  This practice has also included the defence of claims where fatalities have occurred.  The source of such claims has been from all manner of accidents, to include simple slips and falls which have resulted in significant injury, road traffic accidents, accidents at work and trauma from birthing injuries.

Joanne works closely with the partners to manage (and supervise solicitors in managing) high value, catastrophic and complex personal injury claims.  This often involves receiving instructions from insurers shortly after an accident occurs and often prior to a claim being intimated.  This allows early advice to be given to insurers on not only accurate reserve setting but also on how best to protect their position in terms of the potential civil claim.  It also permits liaison with our Criminal/ Health & Safety Team where there is a criminal prosecution of the insured.  Joanne’s involvement with the claim will remain right up to final conclusion be that an extra-judicial negotiated settlement or settlement following a full court hearing.

Over the years, Joanne has also been involved in Court of Session damages actions against registered medical practitioners to also include those involving catastrophic injuries. In addition, Joanne has experience in professional disciplinary work against solicitors advising on claims which have arisen out of solicitors’ handling of clinical negligence and occupational illness claims.

She has considerable experience of litigation in both the Court of Session, ASPIC and the Sheriff Court.